This is a bright, creamy, tasty soup. I wanted to make creamy, vegan tomato soup with deep flavours and this seems to do the trick. I made mine with my homegrown organic tomatoes and as with all food the quality of the ingredients will make a huge difference. If you can’t get tasty fresh tomatoes then use tinned ones. The soup can be served either hot or cold depending on the season. This will make 4 servings. 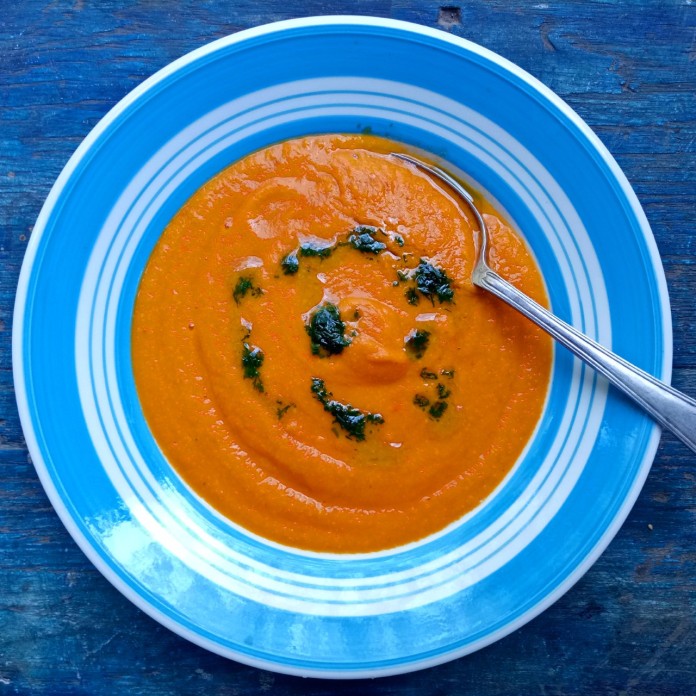 So what do you need?

So what do you do?

Start by steaming / blanching the tomatoes, so that you can remove their skins (this is optional use the tomatoes whole if you prefer). Then in a saucepan add the oil and fry the chopped onion and then add the garlic and fry them while you peel and chop the carrots. Next add the cumin, turmeric, salt and pepper to the pan and fry these for a minute or so. Then add the tomatoes, roughly chopped, and their juice, along with the cashews. My tomatoes were pretty juicy so I added only about 300ml of stock so that the vegetables were well covered in liquid.  Then I add the bay leaves and put a lid on the saucepan and simmer the soup for about 45 minutes until the carrots are cooked. Finally, blend the soup and serve garnished with a drizzle herb oil made from a few coriander and dill leaves pounded with a pinch of salt in a pestle and mortar with a tablespoon or so of extra virgin olive oil . 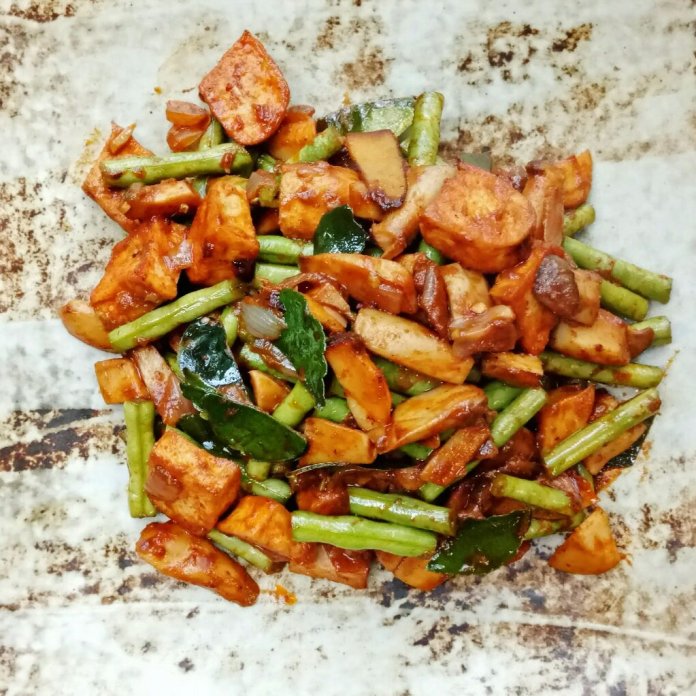 This is a quick and easy dish that I used to order often as a one-plate dish at a street stall near my house in Bangkok. These days I make it as a quick meal at home. It can be served with other Thai dishes and is good on rice with a fried egg, if you eat eggs.

I started by cutting a block of firm tofu into pieces and putting it in a bowl with a couple of tsp. of soy sauce on it. Meanwhile I chopped a smallish onion and crushed a couple of cloves of garlic and chopped up some mushrooms (a small bowlful) into similar sized pieces as the tofu. I also cut a handful of yard beans into pieces about 4 – 5 cms long. I then heated about 3 tbsp. of coconut oil in my wok and fried the tofu in it, I didn’t add the soy sauce, until it was staring to go golden brown. I then put it back in the bowl. In the same oil I fried the onion and mushrooms and then after a couple of minutes or so I added the beans and garlic and stir fried everything for a couple of minutes and the added the tofu, soy sauce and a good tbsp. of red curry paste, the amount of paste you use is up to you. I added a few torn kaffir lime leaves and added a little water to stop the curry paste burning. One the beans are just cooked but are still nice and crunchy you I add a splash or coconut milk (optional) just to make a sauce to coat everything. Serve with rice. 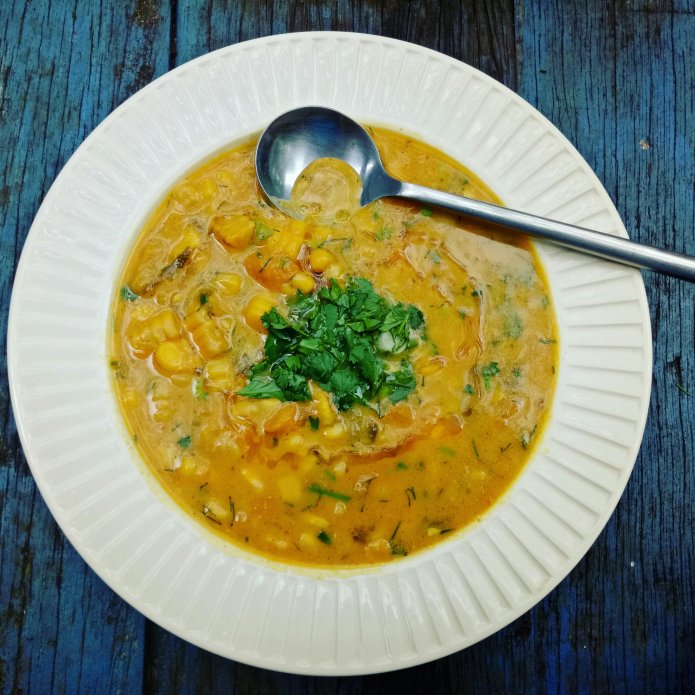 This is a vegan adaptation of the sweetcorn soup recipe I have posted previously. I used coconut milk, substituted butternut squash for the potato and added a little curry powder. It makes a delicious hearty soup.

I started by frying a chopped onion in a little coconut oil and then added a couple of cloves of chopped garlic in a saucepan. While they were frying I peeled a smallish butternut squash, took out the seeds and diced it into small pieces. I then added a tsp. salt and a couple of tsps. curry powder to the onions and then added the squash and stirred so everything was coated in the spiced oil. I then cut the kernels off two cobs of corn and added these. I poured in enough boiling water so all the veg was well covered and added a tsp. marmite and some pepper, covered the pan and simmer for about 30 mins. until the squash was soft. Then I added about 100 ml of coconut milk and simmered for 5 minutes longer. Finally, I added some chopped herbs, coriander, dill and spring onions to the soup. If you want a smoother soup you can partly blend it. I garnished the soup with some of the herbs and a drizzle of chilli oil.